This auction has passed. 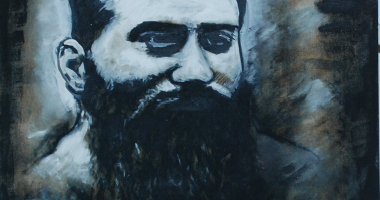 A collection of memorabilia and artwork by Mark Brandon “Chopper” Read (Australian 1954-2013) : Auctioned on 4th February 2017 at ABBEYS BURWOOD.

“Chopper” Read was one of Australia’s most notorious criminals. After spending much of his life in prison, “Chopper” Read turned to writing and art later in life. He is the author of a series of semi-autobiographical fictional crime novels and was the subject of the 2000 film “Chopper” based on this life, starring Eric Bana. He also developed an interest in painting and held several exhibitions prior to his death in 2013. Many of the works in this collection feature self portraits and images inspired by Australia’s most famous colonial outlaw, Ned Kelly.